The world of genetics is truly amazing, new studies are uncovering unknown facts that answer some of our greatest questions. 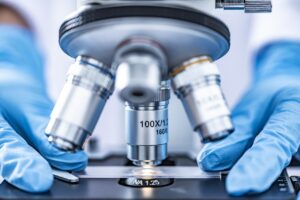 Some of these curiosities may surprise you.

Although it may seem surprising, humans are quite similar to some unusual living organisms. The bacterium E. coli shares 7% of its genetic material with the human race. Something that seems so different turns out to be closer than we may have thought. An even more unexpected case may be the earthworm, with which humans share 21% of their DNA. Two mammals are particularly interesting, mice with which 90% are shared and chimpanzees with a similarity of 98%.

This is the main reason why mice are used in numerous scientific trials, before moving on to testing on humans. What is still a mystery is why they live just for three years, while humans live for more than 60 years on average, reaching more than 100 years in some cases.

If you take a sample of half a hundred African monkeys, there will be more genetic variation than in the entire human race.

The genetic material shared between every human being, is much higher of course, but it may surprise you to know that it is actually 99.9%. Only 0.01% differentiates one person from another. Think of that the next time someone cuts you off on the highway.

The human genome is composed of about 30,000 genes, of which 2% have data on the creation of proteins. In other words, the remaining 98% is DNA with functions still unknown or not relevant; these are known as non-coding regions.

There Is Only One Family

It is often said that there is only one family, and within the study of the genome there are many curiosities related to this saying. One of these surprising facts is that no two humans have the same DNA, not even identical twins. Although it may seem surprising, and the differences are slight, they do exist. So, if one of them were to rob a bank or be involved in a murder, for example, their forensic DNA could be distinguished without a hitch.

Today the proportion of babies born with genetic diseases is 1 in 180 children. These are non-hereditary but genetic diseases that affect the mitochondria. The best-known case is Down syndrome. It can manifest itself in the egg or in the embryonic stages. Nowadays, it is easy to detect in the first stages of pregnancy.

Men and women are very similar in many ways, but different in many others. Men are generally stronger than women, but on average, they live less years.  In 2017 life expectancy for women reached 81.1 years while for men was 76.1 years.

In addition, there are diseases that only men develop. Conditions such as colour blindness or haemophilia are linked to a recessive gene on the X chromosome. Males have a pair of XY chromosomes and females have XX. That is why many genetic mutations only affect the male gender since it has only one X chromosome, while females have two and therefore to be considered a carrier, both X chromosomes must be affected.

Skin, eyes or hair colour are inherited from the parents, but viruses can also be inherited. Although they are deactivated, it is estimated that about 8% of the DNA is derived from a virus. This viral content does not cause problems as far as we know.

Speaking of eye colour, blue eyes appeared about 10,000 years ago as a result of a genetic mutation. Previously, everybody had brown eyes.

Length and Amount of Information

The human genome found in the 36 pairs of chromosomes amounts to about 715 megabytes of data. On the other hand, it would measure 1.8 meters. If all the chromosomes of all the cells in the human body were placed lengthwise, they would measure 180 billion kilometres. The distance between the Moon and the Sun is 150 million kilometres so all the DNA in the human body is a thousand times greater.

These curiosities are just some of the most surprising, but there are many more. As science advances, more discoveries appear that undoubtedly demonstrate how marvellous nature is.

3 thoughts on “Interesting Facts About Genetics That Will Surprise You”

Shopping Cart
We use cookies on our website to give you the most relevant experience by remembering your preferences and repeat visits. By clicking “Accept All”, you consent to the use of ALL the cookies. However, you may visit "Cookie Settings" to provide a controlled consent.
Cookie SettingsAccept All
Manage consent

This website uses cookies to improve your experience while you navigate through the website. Out of these, the cookies that are categorized as necessary are stored on your browser as they are essential for the working of basic functionalities of the website. We also use third-party cookies that help us analyze and understand how you use this website. These cookies will be stored in your browser only with your consent. You also have the option to opt-out of these cookies. But opting out of some of these cookies may affect your browsing experience.
Necessary Always Enabled
Necessary cookies are absolutely essential for the website to function properly. These cookies ensure basic functionalities and security features of the website, anonymously.
Functional
Functional cookies help to perform certain functionalities like sharing the content of the website on social media platforms, collect feedbacks, and other third-party features.
Performance
Performance cookies are used to understand and analyze the key performance indexes of the website which helps in delivering a better user experience for the visitors.
Analytics
Analytical cookies are used to understand how visitors interact with the website. These cookies help provide information on metrics the number of visitors, bounce rate, traffic source, etc.
Advertisement
Advertisement cookies are used to provide visitors with relevant ads and marketing campaigns. These cookies track visitors across websites and collect information to provide customized ads.
Others
Other uncategorized cookies are those that are being analyzed and have not been classified into a category as yet.
SAVE & ACCEPT